This force makes atoms repel or attract each other, thus giving rise to different types of chemical bonds, for example. Understanding how electrical power works is fundamental to understanding various natural phenomena, as well as the large number of technologies that we have today that work based on electricity .

What is electrical force?

The electric force is also a vector quantity , as it has magnitude, direction and sense. The unit of measurement for electrical force is the newton. Furthermore, it is important to remember that, regardless of the magnitude of the charges that interact, the electric force exerted on both charges is equal, as a result of Newton’s third law , called the Law of Action and Reaction.

The law used to quantify the intensity of the electrical force that a charge produces on other charges is Coulomb’s law , which was named after its discoverer, French physicist Charles Augustin Coulomb .

By means of a torsion balance, created by himself, Charles Coulomb was able to accurately determine the intensity of the force between loads. Based on his experimental results, he deduced the mathematical law that explains the force of interaction between electric charges.

The formula below shows the expression used to calculate the intensity of the force of attraction or repulsion between two point particles (particles of negligible dimensions) charged with electric charges of magnitude Q 1 and Q 2 , separated in vacuum by a distance d.

Since the magnitude of the electric force that acts between two charges is inversely proportional to the distance that separates them, the graph that relates this force to the separation between the charges will have a format similar to the following graph: 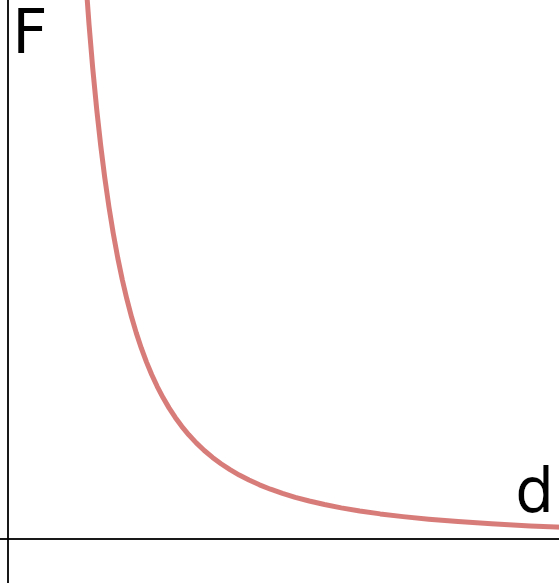 θ – angle between F and d

Now that we have learned about what electrical force is and how to calculate it, how about learning more with solved exercises on the subject?

Question 1 — Two identical point charges of 1.0 mC each are spaced 0.5 m apart in vacuum. Determine the magnitude of the electric force between these two charges.

Let’s use Coulomb’s law to calculate the magnitude of the force between the charges.

Based on the result obtained above, it is concluded that the correct alternative is the letter B .

Question 2 — Two particles of electric charge Q are separated in vacuum by a distance d. Doubling this distance, the magnitude of the electric force F that one of these charges exerts on the other will be:

To solve the exercise, it is necessary to apply the data from the statement in Coulomb’s law.

Based on the result obtained, the correct alternative is the letter C .

Question 3 — An electric charge of 0.5 nC is placed in a region where there is an electric field of 500 N/m. Determine the magnitude of the electric force on this charge and mark the correct alternative:

The correct alternative, therefore, is the letter a .