A short circuit occurs when electric current flows through a conductor or device with negligible resistance, causing it to overheat.

Short circuits are so called because they represent the shortest path that electric current can take in a circuit. To better understand this phenomenon, we will make a detailed analysis of how a short circuit occurs.

The electrical circuit is the path that current travels between the two terminals of a voltage source. It is usually composed of an electricity generator and electrical resistances, so that when the circuit is closed, an electrical current is established between its terminals. Look at the following figure: 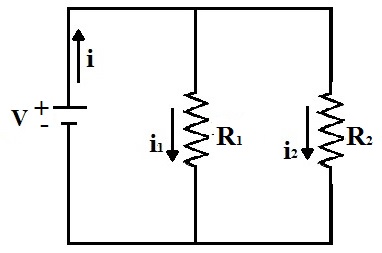 Considering now an extreme case, in which the value of R 1 is very close to the resistance of the circuit conductor, the electric current that passes through the resistor is very high, as well as the current that enters the circuit. The current in the other resistor, R 2 , is practically zero. This type of situation is what characterizes a short circuit.

In summary, we can use the following definition:

“ A short circuit occurs when the electrical resistance in a circuit is very small and the electrical current flowing through it reaches a very high intensity.”

This increase in electrical current causes a large release of energy and, consequently, an overheating of the conductors. This heat release can be obtained mathematically.

First we use Ohm’s Law to relate the current (i) to the voltage (V) and resistance (R) of a circuit:

Then, we calculate the power dissipated in the resistor, which represents the amount of energy that is transformed into heat by the Joule effect, with the expression:

Substituting i, we have:

The instantaneous dissipation of energy that occurs in a short circuit can generate sparks and explosions, causing several damages to electrical circuits, in addition to causing devastating fires in homes and industries. To avoid this type of accident, fuses and circuit breakers are used, which are devices that detect changes in the electrical current and automatically interrupt its passage.