Vectors : They are mathematical models.

Let be the vector V , it represents a physical quantity, it is composed of:

1) Modulus : (magnitude) numerical and absolute value of the same, expresses the quantity that it represents and is assigned a unit

2) Direction : line of action, which according to the reference system has an inclination α

3) Direction : depending on the reference system, it will have a positive or negative sign

Physical magnitude that is represented by a vector and its unit can be newton ( N ), kilogram force (kg) or dyne (dyn).

It is the vector sum of all applied and unapplied forces on a system.

moment of a force

The moment of a force is the product of said force by the perpendicular distance to a determined axis of rotation. When a force is applied to a heavy door to open it, the force is exerted perpendicular to the door and at its maximum distance from the hinges. Thus a maximum moment is achieved. If the door were pushed with the same force at a point midway between the handle and the hinges, the magnitude of the moment would be halved. If the force were applied parallel to the door (ie edgewise), the moment would be zero.

Let the distance vector be a vector perpendicular to a force, of magnitude equal to the distance between a point a and the line of action of the force, it is defined as the moment vector of the force with respect to point a: 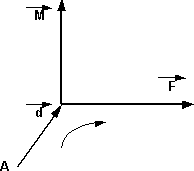 The units of the moment vector are: N m, kilogram (kgm) or dyn cm as this is a vector product.

We graph the forces and then project the components onto the axes: 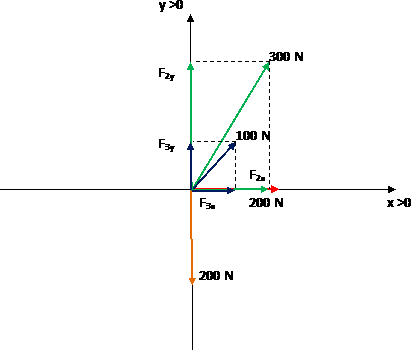 Then we add the components on each axis:

To find the value of each component we use trigonometry, cosine and sine.

Finally we put together the equations and do the math:

We already have the components of the resultant force:

Now we have to find the module of the compound force using the Pythagorean theorem:

Again with trigonometry we find the angle, where α is the angle between the force and the X axis :

Result, the module of the resultant force is:

Result, the á of the resultant force is:

Guide n° 2 of exercises of statics