The objects of study of Electricity are very present in our daily lives, so many Enem questions can explore this subject.

Electricity is the branch of Physics that studies phenomena related to electrical charges , electrical conductors and insulators , processes of electrification , electrical current , electrical appliances , generators , etc. The objects of study of Electricity are very present in our daily lives, which opens the door to a very large number of approaches to this subject in Enem.

The main topics of the study of Electricity are:

QUESTION 1) (ENEM – 2015) A student, needing to install a computer, a monitor and a lamp in his room, found that he would need to install two outlets and a switch in the electrical network. He decided to sketch the electrical schematic in advance. “The circuit must be such that the sockets and the lamp must be subjected to the rated voltage of the electrical network and the lamp must be able to be turned on or off by a switch without affecting the other devices”, he thought.

In order for the sockets and the lamp to be subjected to the same voltage, the association between the elements must be in parallel, so that the switch blocks the electric current only towards the lamp.

QUESTION 2) (AND NEM – 2014) A lighting system was built with a circuit of three identical lamps connected to a constant voltage generator (G). This generator has a switch that can be turned on in positions A or B.

Considering the operation of the given circuit, lamp 1 will shine brighter when the switch is in position

a) B, because the current will be greater in this case.

b) B, because the total power will be greater in this case.

c) A, because the equivalent resistance will be smaller in this case.

d) B, because the generator will supply a higher voltage in this case.

e) A, because the power dissipated by the generator will be smaller in this case.

The brightness of the lamp is associated with the amount of energy emitted by it, that is, its power. Position “A” offers a parallel connection, where the potential difference will be the maximum possible for each lamp and the equivalent resistance will be smaller when compared to the equivalent resistance offered by the switch in position “B”. Therefore, the lamp will shine brighter when the switch occupies the “A” position.

QUESTION 3) (ENEM – 2013) The electric shower is a device capable of transforming electrical energy into thermal energy, which makes it possible to raise the temperature of the water. A shower designed to work on 110V can be adapted to work on 220V, so that its power remains unchanged. One of the ways to make this adaptation is to change the shower resistance for another one, made of the same material and with the

a) twice the length of the wire.

b) half the length of the wire.

c) half the cross-sectional area of ​​the wire.

d) quadruple the cross-sectional area of ​​the wire.

e) fourth part of the cross-sectional area of ​​the wire.

From the definition of power, which says that it is the result of the ratio between the square of the potential difference and the electrical resistance, and knowing that the power of the equipment does not change, we can write that: 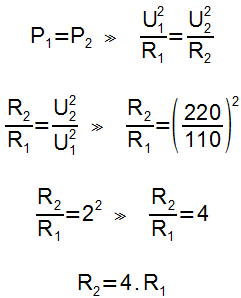